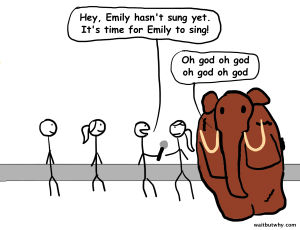 … is quite an unusual condition, I think.  Most people give a start when they hear their voice recorded back.  The answerphone message you left on your home phone, the recorded meeting, the video on holiday.  It sounds different – higher, lower, posher, weedier, growlier, than we thought because we naturally hear ourselves not through the air but through our flesh and bones, which transmit sound in a different, denser, way.

I have been sharing the voice parts for our songs as MIDI files for several years. I like MIDI because it’s small, and simple, and impersonal.  It is a scientifically accurate representation of the pitch and rhythm of a part, so singers have to join in to give it meaning musically as well as adding the words.  That has merit as a teaching tool.

However, Safari stopped supporting MIDI files about two upgrades ago, so anyone with an Apple device could not hear the files without some jiggery-pokery that, let’s face it, was too fiddly to bother with. For months I have known that I will have to record actual recordings – of my own voice – if they are going to be accessible to all the choir members.

I am not a performer. Some musicians are driven by a need to perform, and some are not.  I have never wanted to be on TV or at the Albert Hall.  I love getting lost in Chopin piano pieces all on my own. I love singing with other people but an audience makes it worse, not better. What gives me more of a buzz than anything is  helping other people discover their own musicality and produce amazing sounds.

I privately record all the parts for every song I teach to choir, to feel how they go together and find out the danger points.  But now I have to share them with other people! Teaching tracks for other people to learn from should be spot on for pitch and rhythm, but I should also be breathing in the right places and phrasing it exactly as I want it sung, as well as it having a decent tone and the right vowel sounds.  It takes a lot longer than exporting a MIDI file from my score-writing software and is much more nerve-wracking. I have to share soon for them to be any use, so I cannot keep on listening and correcting.

There are now multiple instances of my voice on this website, which I offer up to you as good enough.  Good enough to help you learn the parts and sing them with conviction – but not perfect, and not the real thing, which won’t exist until the choir sings together in live harmony.