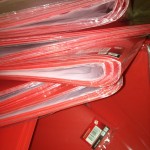 The cardboard box fell apart as I was climbing the stairs. Folders everywhere.

We had an interesting debate at the AGM about our blue folders and whether they are the best way of keeping our music together. Bad points are that they are too small to fit all the music in – though with 20 pockets there is plenty of room for the current things and some old favourites too.  Some people thought they looked less smart than a rigid ring binder but others liked the fact that they are softer, without sharp edges in a confined area.  They are also waterproof, which is a very good thing given our regular outdoor performances.

It ended up with us deciding to have a separate RED Christmas folder each, hence the cascading red folders on my stairs yesterday.  We already wear red and green at Christmas rather than our usual aqua/pale blue, so it works with that. Christmas is a very defined time-period and so keeping that repertoire separate makes sense.

It got me thinking again about paper and whether we should try and wean ourselves off it.  When we learn a song orally, standing up, listening and repeating, I love the quality of sound that is produced. When people read from paper I see the tops of their heads and they start singing to the floor; I have to spend time encouraging eye-contact, and projection, which happen much more spontaneously without written material.  The qualities we develop in the warm-up dissipate, which is a shame.

Maybe just pointing this out will help. Many singers feel more confident with the paper in front of them, knowing they have the words and music. It does mean we can tackle more songs in the limited rehearsal time we have, and that people who can’t come every week can catch up and join in. In that way it’s part of our choir’s accessibility. My feeling is that if I insisted on paper-free performances there would be a significantly smaller version of choir performing, and that would be a shame. Maybe the performance would look and sound more polished but if it didn’t include so many choir members something would be lost. As Frankie Armstrong* puts it, it’s not that we don’t have high standards, but we have deep standards.

* I realise this is ironic because Frankie teaches exclusively by ear and never, ever, gives singers anything on paper.