At Christmas we always revive a couple of songs from previous years as well as learning some new ones. We are always trying to get lots of songs ready at the same time, too, so there is a time pressure. If you have joined the choir during the year, and so far learned songs at the same speed as everyone else, it can be a bit daunting to be surrounded by people launching into a tune they know really well. 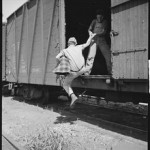 I was looking for an image to go with this post and was stumped for a while.  It’s the opposite of teaching old dogs new tricks, and putting new wine in old wineskins.  The best analogy I could think of was hopping onto a moving train.

The momentum of the choir will get you up to speed in a remarkably short space of time, but you do have to commit.

If you have your own small voice and everyone else is singing loudly and confidently, it’s easy to feel that it doesn’t really matter if you don’t quite know it.  You might sing quietly and look a bit worried. You might even mime, particularly if I ask your section to sing on their own.

As a director, though, I need to hear your mistakes. A choir of leaders and followers is not what I want – I want us all to be fellow-travellers who are independent but with a common destination. I can and will help, but every singer has to do their own singing.

There is no substitute – listen, and sing. Listen, and sing. One without the other doesn’t work. If you just listen, and aren’t brave enough to sing, one tentative attempt will convince you that you can’t do it.  If you just sing and don’t listen, you will only ever hear your version which you think is right. You need to do it over and over until you can hear it’s right.  For most of us, this will involve doing it wrong a few times.  This is absolutely fine.

When you finally get there, it’s a free ride  – but you do have to take that leap of faith.