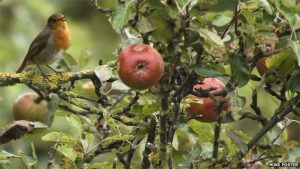 Robin in an apple tree

“The woods would be very silent if no birds sang but those that sang the best.”

I love this little quotation so much I’ve got it on my business cards. It sums up what I’d like to convey to people about singing in particular, and music in general.  Just because someone else does it better is no reason for you to give up – or never start.  Birds sing because they want to tell other birds they’re alive.

Sometimes I go on courses and I’m in a room with a whole bunch of other people who earn a living through music.  One of the most noticeable things – every time – is that during the introductions a lot of people will say of at least one area of music “I’m not very good,” and admit during the tea-break that they feel very aware that other group members know more, play better, or have nicer voices.  Music is such a vast ocean of experience – all the genres, the instruments, the technology, the different cultures and histories – that even if you do nothing else for years you can only paddle in a small corner.  Sometimes it seems that the more you learn, the more you become aware of the size of the ocean you know nothing about – so the most skilled musicians are often the most humble.

Kittiwake is the name of my business.  Kittiwakes are one of the gentlest of the gulls – not aggressive like herring-gulls and the vicious great black-backed.  They have a call which is incredibly distinctive but not praised like the lark or the nightingale.  They live on the wild edges of Britain, laying their eggs on the narrowest of cliff-ledges.  There are kittiwakes colonising the Tyne now (thank you to Eileen for telling me about them), finding little ledges on buildings like these in Durham, and they call from underneath the Tyne Bridge in Newcastle.

In Pembrokeshire they thrive alongside pilgrimage birds like puffins and Manx shearwaters, birds that people travel hundreds of miles to see, and nobody notices the kittiwakes very much.  But they sing their individual song and without them the whole seascape would sound completely different.

Some birds are lucky enough to be born a nightingale, or a lark, whose songs we humans like the sound of.  Some are like the great tit, which sometimes produces really tuneful little scraps of song but spends most of its time sounding like a squeaky wheelbarrow. That’s not going to stop it singing.

Some of us humans have the genes that give us a melodious voice, or a wide vocal range,  or the sort of brain that learns tunes quickly.  We all have a voice which is individual, unique to us, and precious.  And we are lucky enough, like the mocking-bird and the parrot, to be able to learn other people’s songs too.