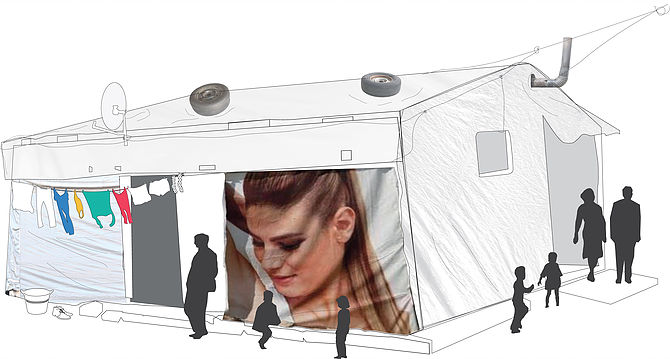 On Saturday we sang at Sheffield’s iconic Millennium Gallery, to support and raise awareness of the Refuge/e installation. AMP-Art have transported a real shelter, one of those issued to Syrian refugees arriving in Lebanon, and erected it in the gallery space.  They give us a chance to walk through a real space, listen to people’s voices, look at their stuff.

Everyday things – shirts, plates, baby’s bottles, boots – have been frozen in time by being cast in plaster and brass. I liked this touch, and I liked knowing that it had taken quite a time.  It seemed to add a layer of distance and respect, this transformation of the ordinary into artefact, so that when as a visitor you walk through the space it is not just walking through someone’s home and staring.

The outside of the shelter is insulated with discarded advertisements – giant photographs incongruous and colourful. The two images on the Refuge/e shelter are a model wearing an elaborate wedding dress, and the president of Lebanon (upside-down).  The value of the advertisements is purely practical, in that they add vital insulation.

What should we sing to complement the exhibition? We had already embarked on learning a couple of songs before we were asked to perform and I decided to leave them in the set.

I ended up with a list of nine songs. Two were specifically written in response to the plight of refugees: Alison Burns’ haunting When Death was Behind Me and Kirsty Martin’s resolute Different Ships. We sang the lovely round By the Waters of Babylon (Philip Hayes via Don McLean), about missing one’s homeland, and we revived Ain’t Gonna Study War (Roxane Smith), an upbeat six-part anthem for peace.

We opened with Bambelela (Zulu for “Never Give Up”), and also brought in E Malama (A Hawaiian song calling for love and respect for the earth and sea.

And then we threw our other songs in – Aida Idem Jano, where we sing in the voice of a Bulgarian youth persuading his girl to come to the fair, and The Sun Ain’t Gonna Shine Any More,  which went down well with the audience and had a poignant edge in the context. (“Emptiness is the place you’re in, Nothing to lose, and no more to win…”)  I have name-checked the other songwriters so here’s to Bob Gaudio and Bob Crewe, who wrote this beauty along with many other classics – most of the Four Seasons’ songs and the wonderful “Can’t Take My Eyes Off of You”.

We finished the set with a new addition – I’m Gonna Lift My Sister Up,  by Faya Rose Toure, who as well as writing a great song, was the first female African-American judge in Alabama. It’s simple to learn, easy to improvise harmonies to, and can be rousing or gentle. I love the simple twist in the lyric – not just saying that your loved one is not heavy, but “If I don’t lift her up, I will fall down.”  Sometimes being strong for other people is what keeps you going.